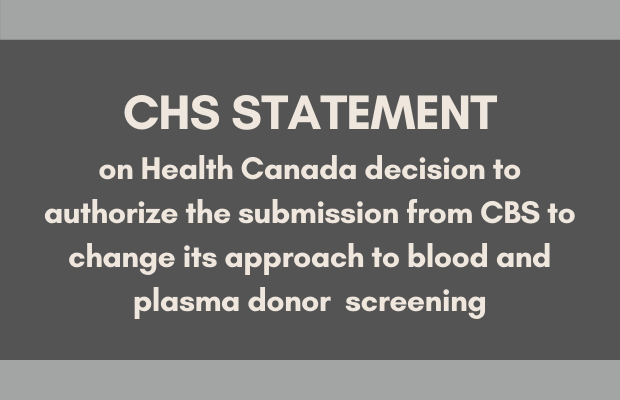 April 28, 2022 (Montreal) – “The Canadian Hemophilia Society (CHS) is disappointed that Health Canada has not followed our advice regarding the changes to donor selection criteria for blood and plasma donation,” said Wendy Quinn, CHS President.

On April 28, Health Canada announced that it had accepted Canadian Blood Services’ (CBS) proposal to remove the three-month blood donation deferral for men who have had sex with men and replace it with very specific questions on sexual behaviours asked to all donors.

“We believe this change will result in an increased risk, albeit very small, of transmitting blood-borne pathogens such as HIV to recipients of fresh components,” said Ms. Quinn. “The CHS would have preferred that Health Canada introduce these new donor selection criteria, in two stages: first for plasma donors and then, at a later date if data support, to donors of fresh components.”

This more cautious two-step approach was proposed to Health Canada by Héma-Québec. Fresh components such as red cells do not undergo the added pathogen reduction safety measures afforded to plasma for fractionation.

Ms. Quinn added, “We call on Health Canada and CBS to indicate what is the monitoring threshold for reversing this decision, should it be necessary, and returning to the current deferral policy that has proven to be safe.”

The CHS also calls on Canadian Blood Services to describe its process to compensate a recipient if he/she is infected with HIV or another blood-borne pathogen as a result of this change in donor selection criteria.

While not in agreement with this decision by Health Canada, the CHS remains open to reforms that support a safe and secure blood supply and that help to eliminate all discrimination in donor selection that cannot be justified for reasons of public health.

About the Canadian Hemophilia Society
Founded in 1953, the Canadian Hemophilia Society (CHS) is a national voluntary health charity. Its mission is to advocate to improve the health and quality of life for all people in Canada living with an inherited bleeding disorder until cures are universally available. Its vision is a world free from the pain and suffering of inherited bleeding disorders. The CHS is the leading patient organization in Canada to independently monitor the safety and supply of blood and blood products within the Canadian blood system.