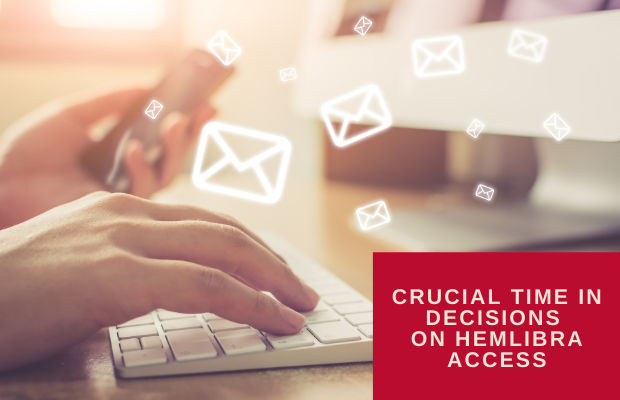 On May 25, 2021, Canadian Blood Services (CBS) released its report on emicizumab (Hemlibra) to the provincial/territorial (P/T) Ministers of Health (except Quebec), recommending eligibility for people with severe hemophilia A. An influential medical group in Quebec has also made a favourable recommendation.

The decisions to grant access are now in the hands of P/T governments. Announcements are expected in the coming weeks for both Quebec and the rest of Canada. This is a crucial time.

Please reach out to your contacts for a final push – one more letter-writing blitz – and let them know that a newly updated letter for the rest of Canada has been added to the CHS website. Quebec’s updated letter will go up next week. This is a new letter, meaning that even if you or they have sent one of the previous letters, sending this new letter is a must.

Now is the last chance to influence the decisions! Together, we will make this happen!