Approvals of Hemlibra – The devil is in the details 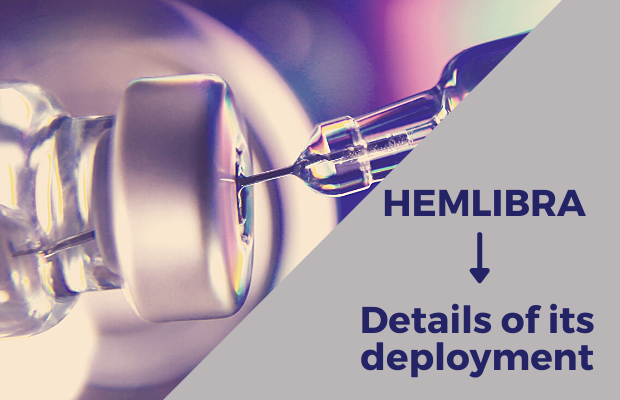 Montreal, September 13, 2021 – In recent weeks, governments in both Quebec and the rest of Canada have expanded access to Hemlibra to patients with hemophilia A without inhibitors. Unlike factor VIII concentrates, however, Hemlibra will not be available to all people with hemophilia A.

Hemlibra was initially approved in summer 2019 for all those with inhibitors to factor VIII.

Who then is eligible in the regions served by Canadian Blood Services (CBS)?
In the provinces and territories served by CBS (all except Quebec), health authorities expanded access, without age restrictions, to include those with severe congenital hemophilia A (intrinsic factor VIII level < 1%) without inhibitors who are candidates for routine prophylaxis to prevent bleeding or reduce the frequency of bleeding episodes. This means that those people with moderate hemophilia, even those with factor VIII levels just above 1%, are not eligible. All the research studies leading to the licensure of Hemlibra were carried out in people with severe hemophilia A. A factor VIII level of 1% or less is the standard definition of severe hemophilia. Research is only now starting into the efficacy of Hemlibra in populations with factor VIII levels above 1%.

It is becoming better recognized that factor level, as measured by a lab test, is not the only element affecting the severity of clinical symptoms. Other issues, some understood and others not, affect how often and how easily people bleed. Some people with levels below 1% rarely bleed with no apparent cause, while others in the moderate range of 1-5% can suffer from frequent non-traumatic bleeds. It can only be hoped that as research continues and the tendency to consider clinical bleeding as opposed to factor assays measured by lab tests gains acceptance, patients with moderate hemophilia who require prophylaxis will become eligible.

CBS has announced that Hemlibra should be available in hemophilia centres by mid-October.

Who is eligible in Quebec?
In Quebec, health authorities have taken a more clinical view, not based only on lab results. Hemlibra access was expanded for prophylactic use in those with moderate or severe hemophilia, as recommended by the Canadian Hemophilia Society and the Association of Hemophilia Clinic Directors of Canada. Recognizing the difficulty of venous access, eligibility is without conditions for those children four years old and younger. For people five years and older, however, Hemlibra would be made available only if the annual cost is no higher than the annual cost of factor VIII.

What does this mean? First of all, the manufacturer of Hemlibra, Roche, and Héma-Québec, which procures and distributes coagulation products to Quebec hospitals, must negotiate a price. One can only hope that they quickly arrive at a competitive price that will permit access to all moderate and severe patients who require prophylaxis, should they and their physicians so choose.

But how will the annual costs be compared? Calculated patient by patient? This would be extremely difficult. Factor usage for an individual varies widely from year to year; Hemlibra dosage, and therefore cost, is fixed. Or would it be calculated by comparing the annual costs of hemophilia A for all patients? What will be compared? The average cost of FVIII last year? Over the last five years? What do we compare Hemlibra to: the cost if the factor VIII target trough level is 1% (the traditional target), or 5% (to change a person from a severe to a mild condition) or even 15% (Hemlibra’s factor VIII equivalent)? Answers to these questions will determine who is eligible.

The availability date for Hemlibra in Quebec will depend on the speed of the contract negotiations between Roche and Héma-Québec.

How does Hemlibra work?
Hemlibra is a monoclonal antibody that performs the same function as factor VIII, the natural protein missing in the blood of people with hemophilia A, which in different forms has been the routine treatment for the last 70 years. Factor VIII is administered both to stop and to prevent bleeding; Hemlibra, however, can only be used to prevent bleeding (prophylaxis). In the event of an active bleed needing treatment, factor VIII would be infused.

While the expansion of Hemlibra access is indeed fantastic news, some questions remain. As is often the case, the devil is in the details. More work needs to be done ensure access to all those who can benefit. Stay tuned.