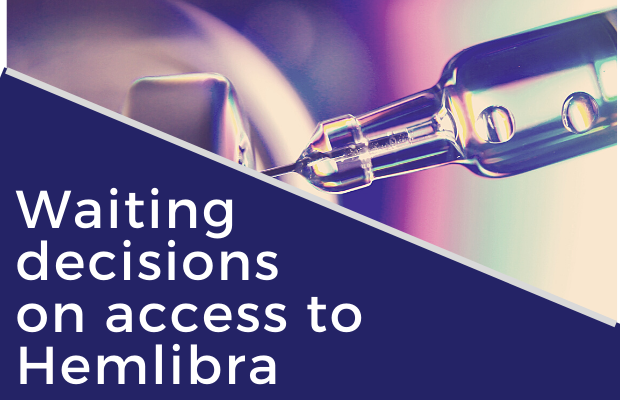 Montreal, February 4, 2021 – The hemophilia community is awaiting decisions by Canadian health authorities on access to Hemlibra for people with hemophilia A without inhibitors.

Hemlibra has been available to those with hemophilia A and inhibitors since summer 2019. A small group of 15 people without inhibitors, but with critical needs, was granted compassionate access by the manufacturer, Roche, in early 2020.

In Quebec, the Institut national d’excellence en santé et en services sociaux (INESSS) made its recommendation on which patients with hemophilia A should receive Hemlibra in mid-January. That report remains secret. A decision by Quebec’s Ministère de la Santé et des Services sociaux (MSSS) as to whether or not Hemlibra should be funded via Héma-Québec is expected at any time.

In the rest of Canada, the Canadian Agency for Drugs and Technologies in Health (CADTH) released its evaluation of Hemlibra on December 23. It recommends reimbursement via Canadian Blood Services (CBS) for, “patients with severe hemophilia A (intrinsic FVIII level < 1%) who are candidates for routine prophylaxis to prevent bleeding or reduce the frequency of bleeding episodes.” It also recommends, however, that “the public payer cost of emicizumab (Hemlibra) should not exceed the public payer cost of treatment with the least costly FVIII replacement that is being reimbursed for the prophylactic treatment of patients with hemophilia A without FVIII inhibitors.” This means that cost may be a barrier to access.

Meanwhile, the CHS has learned that CBS and the manufacturer of Hemlibra, Roche, have entered into pricing negotiations. The Canadian Hemophilia Society (CHS) submitted a detailed report with its own recommendations to CBS on January 21. The CHS recommends “that Hemlibra be made available to all patients with severe hemophilia, and those rare cases of people with mild and moderate disease who have a severe bleeding phenotype. Access to this therapy for those with less severe disease should await more research.”

On January 27, the CHS launched an e-mail letter-writing campaign to provincial/territorial governments. Individuals wishing to support access to Hemlibra can use the online template to write to their local provincial politician and Minister of Health.