Home / Community News / FVIII/IX tenders: how are they done?

FVIII/IX tenders: how are they done? 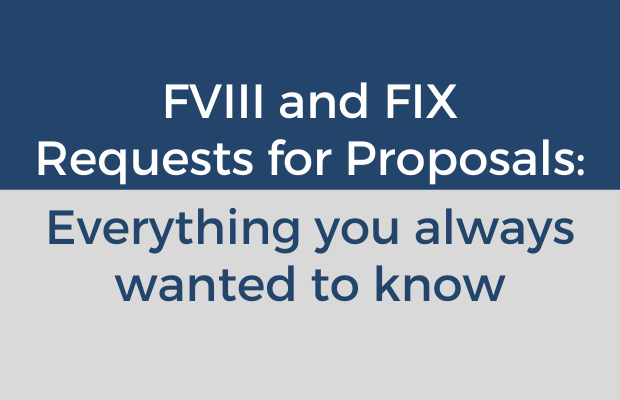 Every two or three years, Canadian Blood Services (CBS) and Héma-Québec put out “Requests for Proposals” (RFP) to companies with recombinant factor VIII and IX products that are approved for use in Canada. These are very similar to “tenders” in the commercial world.

CBS’ tender was put out in spring 2021 and results will be announced later this autumn. Héma-Québec’s tender will be issued very soon. In both cases, contracts will take effect on April 1, 2022, although the transition from current contracts to the 2022-24 contracts may well begin before or even after the effective date of April 1.

The evaluation of the various proposals has become more complicated in recent years. There are now ten recombinant factor VIII and five recombinant factor IX products licensed by Health Canada and eligible to be considered. Moreover, these products have different half-lives, so an International Unit (IU) for one product is not always equivalent to an International Unit for another product. There are also differences in their time on the market, their historical “popularity”, the results from their respective clinical trials, the indications as to who can receive the product (some are not approved for children), their storage conditions and shelf lives, to name just some of the elements to be considered. In addition, a non-factor replacement product, a factor VIII mimetic in the form of a bi-specific monoclonal antibody (emicizumab), is now approved for the treatment of hemophilia A and is in competition with the factor products.

For the recent CBS RFP, as in past years, CBS formed a Selection Advisory Committee (SAC) to evaluate the bids from the different companies. In addition to the involvement of CBS staff from the medical, scientific, legal and financial departments, six external experts were invited: two each from the Association of Hemophilia Clinic Directors of Canada, the Canadian Association of Nurses in Hemophilia Care and the Canadian Hemophilia Society.

In advance of even issuing the RFP, the SAC had to decide what information to request from the companies, which product characteristics would be scored and the importance (weighting) of each characteristic. After the bids were received, the members of the SAC had to review the voluminous submissions (each one, if printed, would make a stack of paper reaching the ceiling), assign a score for each characteristic for each product and provide justification. Once the products were “scored”, the prices were made known to the committee members and factored into the final value. Consideration was also given to the problem of potentially having to force patients to switch products if a current product was not selected. Then, a recommendation on the ideal mix of products was agreed to by consensus. The recommendation was then presented to CBS’ Executive Management Team for a final decision and endorsement by the CBS Board of Directors.

The SAC met by videoconference over 40 times for periods of one to six hours during the period of January to July 2021. Clearly, the videoconferences and the time needed to prepare for them were a tremendous commitment, especially for those who had to fit the work into their own professional schedules.

In the end, all members of the SAC shared the same goal: procure the widest range of the safest, most efficacious products at the best price for the treatment of hemophilia A and B.