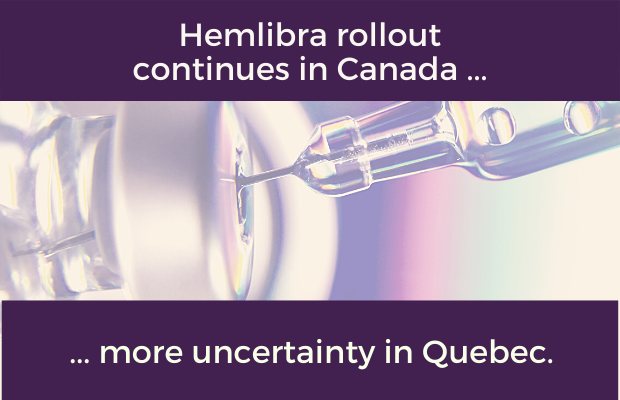 November 10, 2021 (Montreal) – The Hemlibra rollout continues in provinces served by Canadian Blood Services (CBS). Since access requests from physicians began to be accepted on October 18, thirty-two applications have been approved and treatment started or planned. All urgent requests have been accepted. Forty more requests have been received by CBS and are currently being reviewed for treatment start-up dates later in November, December and January.

CBS has committed to transitioning 18 to 36 patients per month for the coming months and has so far been able to maintain this pace without endangering supply for those already started on the therapy.

Note that treatment centres are scheduling requests in consideration of:

Patients/caregivers interested in considering Hemlibra for prophylactic care should contact their treatment centre. At this time, only those with a baseline factor VIII of less than 1% are eligible.

Quebec
Children four years of age and under are now being approved for Hemlibra in Quebec through an exceptional access process. Treatments have started for some.

For those five years of age and older, Hemlibra has been designated “interchangeable” with factor VIII by the Ministère de la Santé et des Services sociaux (MSSS). As a result, indications are that it will be considered as part of a tender (appel d’offres) with factor VIII products. This tender has not been announced, meaning that there will be a considerable delay in access.

The CHS/CHSQ is contesting this designation of “interchangeability” to the MSSS.