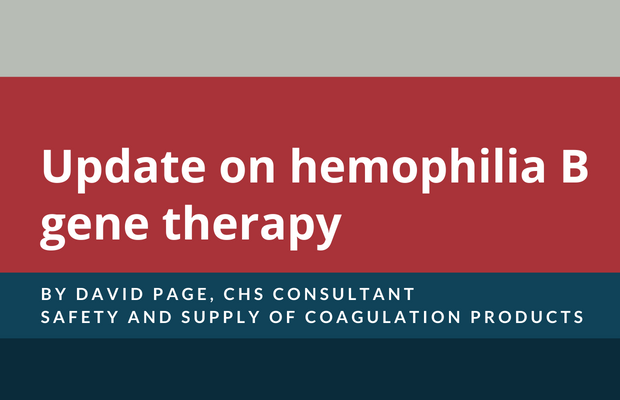 Montreal – November 28, 2022 – The U.S. Food and Drug Administration (FDA) approved the first gene therapy for hemophilia B on November 22. Etranacogene dezaparvovec has been given the brand name of Hemgenix in the U.S.

Originally developed by uniQure, the therapy will be marketed by CSL Behring, already present in the hemophilia market with treatments for hemophilia A and B, von Willebrand disease and other rare factor deficiencies.

FDA’s approval was supported by data from a Phase 3 trial called HOPE-B, which is evaluating the safety and efficacy of Hemgenix in 54 men, ages 18–75, with moderate to severe hemophilia B, over a period of five years.

“Today’s approval provides a new treatment option for patients with hemophilia B,” said Peter Marks, M.D., Ph.D., director of the FDA’s Center for Biologics Evaluation and Research, “and represents important progress in the development of innovative therapies for those experiencing a high burden of disease associated with this form of hemophilia.”

Men who took part in HOPE-B have expressed mean factor IX activity levels of 37% two years after the one-time infusion. Ninety-four percent of those in the trial stopped their prophylactic infusions of FIX.

Contrary to many other gene therapies in development, Hemgenix has proven efficacious even in individuals with pre-existing antibodies to the AAV vector used to deliver the factor IX gene to the liver. This means fewer people will be ineligible for the treatment. Moreover, fewer than one in five individuals required the use of corticosteroids to counteract the body’s immune reaction to the therapy.

Clinical trials with a number of gene therapies for hemophilia B have shown steady durability of expression for up to ten years, giving hope that this therapy will provide good protection from bleeding for a decade or more.

CSL Behring announced a “list” price of $U.S. 3.5 million US ($4.6M CAD) before negotiations with payers, making it the most expensive medicine in the world.

It is expected that CSL Behring will submit etranacogene dezaparvovec for regulatory review by Health Canada in mid-2023. Marketing approval could come as early as late 2023 or early 2024. Decisions on reimbursement would follow. The price in Canada is unknown at this time; however, drug prices in Canada tend to be significantly lower than in the U.S.

The FDA announcement is available at www.fda.gov/news-events/press-announcements/fda-approves-first-gene-therapy-treat-adults-hemophilia-b.