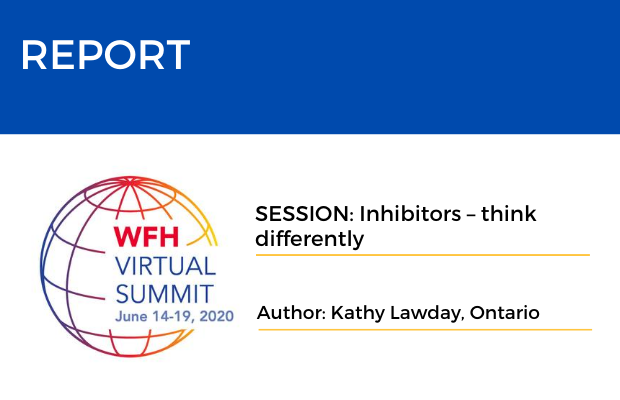 The development of inhibitory antibodies to therapeutic FVIII in up to 40% of severe hemophilia A (HA) patients is a major complication in the treatment and prevention of hemorrhages. The reasons some HA patients develop inhibitors while others do not remain unclear. It has been considered that inhibitor development is a classical immune response to a foreign antigen but this theory may be too simple.

There appears to be some plasticity in the immune response to therapeutic FVIII. Twenty seven percent of patients initially develop transient inhibitors which are often of low titre and disappear spontaneously without change in therapy while anti-FVIII IgG can be found in inhibitor negative previously treated patients. It is also known that inhibitors can develop in ageing patients, particularly after trauma or surgery – is this a loss of tolerance or a de novo development despite years of treatment? Healthy individuals show a tolerance to self or endogenous FVIII by one or more mechanisms: elimination of autoreactive cells, ignorance or active tolerance and these mechanisms may be important in HA patients as well. Several “danger signals” have previously been thought to increase the risk of inhibitor development, including dose, vaccination and acute bleeding. There is some evidence of the effect of dose yet ITI with high doses eliminates inhibitors in many people and recent work disproves the association of vaccination and active bleeding per se. Rather it seems that inflammation is the key and the risk of inhibitor development is associated with a failure to mount an adequate anti-inflammatory response via T cell function. It is known that T cell response is decreased in older individuals and affects several immune functions.

In conclusion, a new way of looking at inhibitor development may be that the majority of HA patients initially develop a transient immune response to administered FVIII but develop a tolerance by recognition and regulation using counteractive FVIII-specific effector elements, analogous to healthy individuals, while patients who develop an inhibitor demonstrate an inability to control an immune response to an innocuous antigen.

Other research into the inflammatory status of HA patients with persistent inhibitors showed that up-regulation of the innate immune modulators may influence the responses to and eventual outcome of ITI therapy. Better understanding of these innate and inflammatory mechanisms suggests a failure of tolerogenic mechanisms. Future goals may be to identify therapeutic targets to improve ITI outcomes.

The third presentation looked at gene therapy as a tolerogenic strategy. Gene therapy clinical trials have excluded potential subjects with a history of inhibitors and it is not yet known whether HA patients treated with gene therapy might develop an inhibitor. Preliminary work in inhibitor positive dogs has shown the potential benefits of AAV liver – directed gene therapy as an attractive strategy for ITI in challenging patients who show poor response to ITI. Continuous expression of FVIII also overcomes the challenges of compliance and catheter-related morbidity associated with ITI with factor concentrates. Higher levels of FVIII or FIX transgene expression may accelerate the eradication of pre-existing inhibitors but tolerance seems a common outcome even at low expression levels. Once the inhibitor is eradicated, prophylaxis to prevent an anamnestic response was not required and the bleeding phenotype was improved by continuous FVIII/FIX transgene expression following gene therapy. Note that some of this research was carried out in Canada – in Dr. David Lillicrap’s laboratory at Queen’s University in Kingston, Ontario.