Management of comorbidities in bleeding disorders 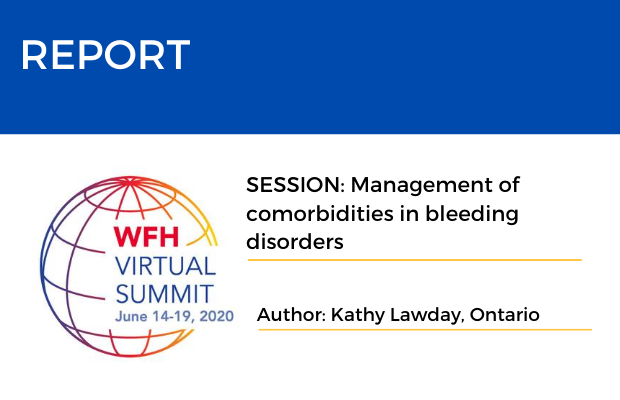 Three decades of people with hemophilia unexposed to contaminated factor products and current treatments capable of suppressing and eliminating HIV and HCV, respectively, has again seen an increase in survival rate. In addition to the usual comorbidities associated with advanced age in the general population, several specific issues occur in patients with bleeding disorders. This comprehensive session explored the incidence and management of the comorbidities of the ageing people with hemophilia with a focus on cardiovascular disease and osteoporosis.

Dr. Michael Makris, director of the Sheffield Haemophilia and Thrombosis Centre, Sheffield, UK, presented the story of a 99-year-old man with severe hemophilia A. He started on prophylaxis at age 92, had a redo knee replacement the same year and had a hernia repair at age 95, thus demonstrating that expectations can change. Each life stage from childhood, through adulthood to retirement and even to 4th age dependency brings its challenges.

In older patients these include cardiovascular, renal, hypertension, obesity, diabetes, mobility including arthropathy, bone disease and falls, decreased visual acuity, dementia, HIV/HCV coinfections and malignancy. In a person with hemophilia cardiovascular and hypercholesterolemia risks may be reduced but hypertension, hepatitis and musculoskeletal problems are increased compared to the general population. While antiretroviral therapy has changed the outlook of HIV to a chronic disorder, the price may be an increase in cardiovascular problems. Similarly, treatment of hepatitis C is effective but the risk of liver cancer is not eliminated. Malignancy is increased in people with HIV and hepatitis C and participation in screening programs for bowel and prostate cancers is recommended, with coverage by clotting factors if biopsy is required. Thrombocytopenia during cancer treatment may also require clotting factor coverage. Elderly people would benefit by the addition of a hematologist perspective as part of a comprehensive geriatric assessment when problems of self treatment, dexterity, mobility, hearing and vision loss, depression or dementia are present. Some care homes will not accept patients on IV medications. The Hemophilia Foundation of Australia has produced a booklet – HFA Getting Older report (www.haemophilia.org.au/publications/getting-older/reports). In summary, in the older people with hemophilia, treating the bleed is no longer the main issue.

Dr. Pal Andre Holme, professor and senior consultant at the Oslo University Hospital, discussed antithrombotic drug management. With cardiovascular diseases come the problems of stents, antiplatelet agents, anticoagulants, and atrial fibrillation. After surgery, decisions regarding thromboprophylaxis and treatment of venous thromboembolism are required. Hypertension and overweight increases the cardiovascular comorbidities compared to the general population but coronary artery disease mortality is decreased, probably due to reduced thrombin generation at point of clot rupture thus raising the question: “Will prophylactic intensive clotting factor use result in an increase in cardiovascular artery disease?”

Acute coronary syndrome can be treated as usual, but risk may be increased. Replacement clotting factor will probably not be required if baseline is more than 25% but should not be higher than 80%. Radial access and second-generation drug-eluting stents are preferred with antiplatelet agents for only four weeks. DDAVP should be avoided in ischemic heart disease. Anticoagulants should only be used in people with hemophilia with atrial fibrillation and with a high risk of stroke; catheter ablation or low dose aspirin may be preferred. The risk of spontaneous venous thromboembolism (VTE) is rare and even postoperatively is estimated to be 0.5% compared to 4.3% in the general population. No thromboprophylaxis may be considered if no predisposing factors and factor concentrates should be given by continuous infusion to avoid peaks. Experience in treating VTE in people with hemophilia is limited, anticoagulants including direct acting oral agents, if used, should be limited to no more than one month. Thrombectomy with replacement factor may also be considered.

Management of osteoporosis in people with hemophilia can be considered under epidemiology, pathophysiology, screening and treatment. Dr. Christine Kempton, associate professor, Hematology & Medical Oncology, Emory University Hospital Midtown, Atlanta, Georgia, described the decreased bone density in people with hemophilia compared to the general population, with decreases even seen in mild hemophilia, female carriers and children. Low bone density as measured by DEXA scans predispose to fragility fractures, osteopenia and osteoporosis. Bone formation is a balance between resorption and formation of bone, and FVIII/VWF affects osteoclasts on resorption side of balance while thrombin receptors reside on osteoblasts and affect bone formation. Bone disease may be affected by disturbed coagulation or as a consequence of hemophilia itself. Risk factors for osteoporosis are joint disease, low body mass index, HIV, vitamin D deficiency, tobacco use. Moderate alcohol use is protective while the effect of physical activity is variable. In older patients, joint replacement, even redo surgery, may be required more for osteoarthritis than for arthropathy. Screening is recommended for people with hemophilia over 50 years old. Treatment for men is standard until evidence that osteoporosis in people with hemophilia is different.