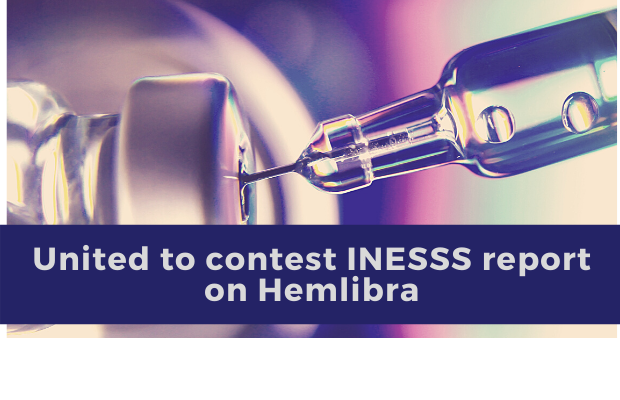 Montreal, March 29, 2021 – Medical and patient groups in Quebec and across Canada have united in their rejection of the recommendation by Quebec’s health technology assessment group, INESSS, not to fund Hemlibra, an innovative therapy for severe hemophilia A.

On March 25, all 11 physicians who treat hemophilia in Quebec’s four specialized hemophilia treatment centres (HTCs) signed a letter to the Minister of Health and Social Services which concluded, “For physicians who treat hemophilia patients, this conclusion is contrary to the evidence, to best clinical practice established by national and international guidelines as well as ethical principles of equity and social justice.” The letter was co-signed by the presidents of the Association of Hemophilia Clinic Directors of Canada (AHCDC) and of the Association des médecins hématologues et oncologues du Québec (AMHOQ).

Earlier in the week, letters were sent by the Canadian Hemophilia Society – Quebec Chapter, the patient association representing the 800 Quebeckers with hemophilia A, and by the members of the Canadian Association of Nurses in Hemophilia Care who work in Quebec’s HTCs. Their messages were similar: the INESSS report is scientifically flawed and should be set aside, Hemlibra should be funded immediately, and all those who suffer from severe hemophilia A, about 200 people, should be eligible to receive it.

The Minister of Health and Social Services now has until mid-May to consider a final recommendation from Quebec’s Comité consultatif national en médecine transfusionnelle before making a decision on reimbursement of Hemlibra for people with severe hemophilia A (without inhibitors to factor VIII).

* Please note that the letters are in French only.

To know more on Hemlibra and what the CHS is doing to make it available to all, please go to: www.hemophilia.ca/hemlibra-access.