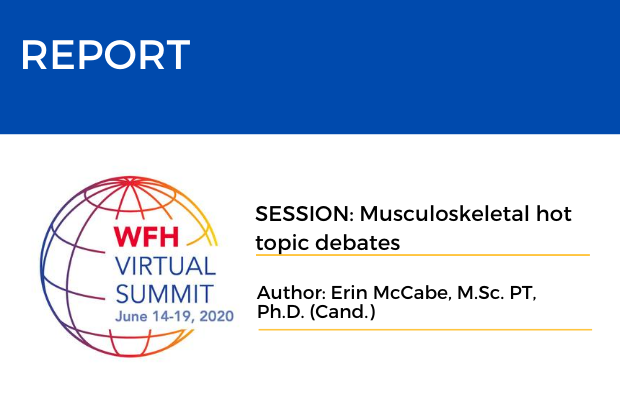 In this session, three “hot topics” related to muscle, bone and joint health in people with bleeding disorders were debated by experts in their fields:

Point-of-care ultrasound at home by patients
Point-of-care ultrasound  is a  portable tool that produces images of the inside of the body using soundwaves, used by clinicians in the clinic to help them determine the best way to manage a patient’s issue or problem. It is not the same as diagnostic ultrasound, where you would go to a special radiology clinic or department to have a comprehensive ultrasound examination by a specialist.

Some patients might be familiar with the use of POC-US at their treatment centres. A member of their clinical team (e.g., physiotherapist, hematologist) may have used POC-US during a clinic appointment to take an interior look at a patient’s joint or muscle. Most often, it is used to see whether a patient has had a bleed or to monitor whether a bleed is healing.

There are new mobile technologies being developed that will enable patients to have a handheld ultrasound probe at home. From the hospital clinic, a clinician can guide a patient in taking pictures of their joint or muscle using the ultrasound probe and view the ultrasound imaging in real-time. The topic of this debate was whether or not it is a good idea to have patients using POC-US at home.

Dr. Hortensia de la Corte Rodriguez, specialist in physical and rehabilitation medicine at La Paz University Hospital in Madrid, argued against the use of POC-US devices at home by patients. She was not opposed to the idea of the technology but felt that further research is needed. Before home POC-US can be confidently used by the bleeding disorder clinic team, it is important to ensure that the technology captures good-quality ultrasound images and reliably sends them to the clinic computers; that training programs are in place for patients; that ultrasound images taken by patients are useful for assessing muscles and joints and deciding treatment from a distance; that quality of care is maintained with virtual medicine; and that patient health information is secure.

Dr. Annette von Drygalski, director of the Hemophilia and Thrombosis Treatment Center at University of California San Diego, argued for the use of POC-US devices at home by patients. Her main points were that the technology is now available and relatively inexpensive; that there is some evidence that people without medical training are capable of being guided to take good ultrasound images; and having patients doing their own ultrasound at home could reduce the burden on the clinic and the patient by reducing the need in-person appointments. Dr. von Drygalski’s team and others have started some preliminary research studies on home use of POC-US, so more research findings will be coming soon.

Overall, the two speakers were in agreement: POC-US by patients at home is a potentially useful technology to enhance patient care, but it needs to be carefully researched and tested before it is put to use in clinics.

Ankle fusion or ankle replacement for advanced ankle arthropathy
In people with bleeding disorders, the ankle joints are commonly affected. Repeated joint bleeds lead to pain, swelling, stiffness and permanent joint damage (arthropathy). There are surgical options for those who can no longer manage their daily activities due to ankle arthropathy. Two options were debated by two orthopedic surgeons who work with people with hemophilia:

Dr. Mauricio Silva, associate professor in orthopedic surgery at UCLA, argued that ankle fusion is a safer, more effective procedure for people with advanced hemophilic ankle arthropathy. There are generally more complications with ankle replacement compared to ankle fusion, and the artificial implants eventually wear out and need to be replaced, he noted. He also pointed out that ankle fusion produces good outcomes – for instance, patients are typically satisfied with their surgery and also notice improvements in their quality of life, pain and functional abilities. Overall, his argument was that ankle fusion is working well for people with hemophilia, so the additional risks associated with ankle replacement are not worth it.

Dr. David Dalstrom, orthopedic surgeon at UC San Diego Health, argued that it is time to consider ankle replacement as the main treatment for patients with hemophilic ankle arthropathy. The newer ankle implants are lasting longer (10 years or longer) and there is better technology for replacing the implants once they wear out, he said. Also, people who have ankle replacements (compared to ankle fusion) have fewer problems with their other joints in the lower ankle and foot, better functional abilities and experience an equal amount of pain relief. He also pointed out that ankle replacement is the gold standard for patients with other chronic conditions who are at higher risk of infections (e.g. rheumatoid arthritis, diabetes), so this should also be considered for people with hemophilia.

Janaina Bosso, physiotherapist at the Hematology and Hemotherapy Center of the University of Campinas in Brazil, argued for the usefulness of the HJHS. Its main advantages are that is well-tested and shown to be a good way of detecting whether there have been changes to your joints. It has also been used for over 10 years, so there is data available to compare scores; for example, a patient’s score from a previous clinic visit can be compared to their current score. You can also compare the HJHS scores between different groups of patients, for example, the scores of patients in Canada compared to those in India. Furthermore, the HJHS training manual and materials are available for free and in many languages.

She did acknowledge some challenges with the HJHS: it can be time-consuming to perform; requires physical space that may not be available; and was developed for children, therefore it is unclear whether its usefulness translates to adults.

David Stephensen, physiotherapist at the Kent Haemophilia and Thrombosis Centre in Canterbury and the Haemophilia Centre at the Royal London Hospital in UK, argued for the inclusion of measures that matter most to the patient, which may include functional measures. The HJHS looks at the condition of a specific body part but does not look at how well individuals do in the day-to-day activities that are important to them, he noted. He argued that functional measures used in the general population are likely more sensitive to pick up changes in a person’s physical condition. Furthermore, functional measures can be tailored to each individual. The clinician can choose a tool that measures outcomes that are meaningful to the patient, for example, measures that match with the patient’s goals. Finally, there is research showing that functional measures and questionnaires can be done using telehealth video technologies, while the joint and muscle testing involved in the HJHS cannot really be done in a virtual setting, he concluded.

In the end, the main message from both speakers was that the HJHS is useful for some purposes but should be complemented by functional measures that are meaningful to each individual.