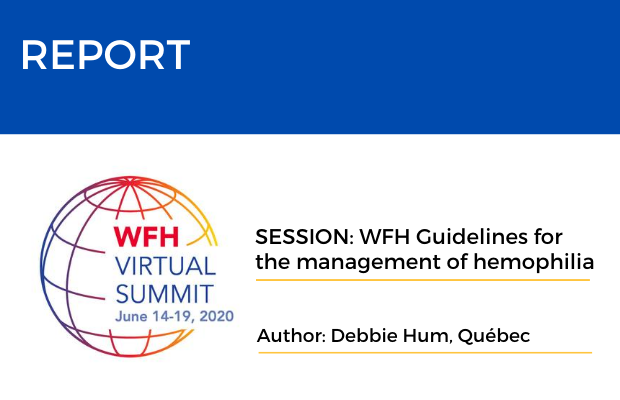 The global bleeding disorder community received an advance look at new international guidelines for the management of hemophilia at the WFH Virtual Summit 2020, at an early session on Sunday, June 14. “There have been many developments in the last seven years in both the diagnostic aspects, particularly the role and scope of genetic assessment, as well as in therapy, with a myriad of new and novel therapeutic products for people with hemophilia with and without inhibitors,” said Dr. Alok Srivastava, hematologist at Christian Medical College in Vellore, India, who has served as content lead for all three editions of the WFH treatment guidelines.

A panel of 50 dedicated volunteers, consisting of both international experts in the field and well-informed people with hemophilia or their parents, were involved in this latest global effort. Canada was well represented on the panel; pediatric hematologist Dr. Manuel Carcao and pediatric rheumatologist Dr. Brian Feldman, both of the Hospital for Sick Children in Toronto, and physiotherapist Greig Blamey, of the Adult Bleeding Disorders Clinic at the Winnipeg Health Sciences Centre, were major contributors to the development of the new WFH guidelines. In addition, David Page, CHS national director of health policy, provided hemophilia and editorial expertise to the medical editors.

Regarding the array of extended half-life factor concentrates now increasingly available and increasingly used in more countries around the world, the panel stated no preference among the various mechanisms of action used to extend half-life (i.e., PEGylation, Fc fusion, or albumin fusion). “This was the source of much discussion because of disparities in regulatory approval between some countries and the absence of observations at a preclinical level that are consistent across all products within a particular mechanism of action,” Dr. Pipe said. “There is enough agreement that based on clinical safety endpoints to date, there is no evidence sufficient to recommend a preference among these different strategies. There are clearly monitoring issues and challenges in interpreting clinical correlations with specific plasma levels that still remain to be elucidated.”

The panel also recognized the sizeable work in recent years on the application of clinical tools for advancing individualized pharmacokinetic (PK) monitoring and PK-guided dosing to achieve more individualized prophylaxis.

Prophylaxis: Standard of care around the world
Prophylaxis is essential and now represents standard of care, not just in well-off countries but everywhere, said Dr. Manuel Carcao, who led the work by panelists of the prophylaxis chapter. “We can do better with prophylaxis than we did in the past, and the evidence is overwhelming that prophylaxis can be tailored and individualized.” Therefore, the WFH advocates the use of prophylaxis over episodic treatment even in countries with significant health care constraints. Episodic therapy is essential treatment for acute hemorrhages but will not prevent long-term joint damage; however, less intensive prophylaxis may be used. “All forms of prophylaxis – whether high, intermediate or low doses of clotting factor or prophylaxis with non-factor replacement agents such as emicizumab – provide superior benefits over episodic therapy,” he said.

Panelists also found that there is increasing recognition and evidence that factor trough levels of 1-3% are insufficient to totally prevent bleeds in all patients with hemophilia and allow occasional clinical and subclinical bleeds resulting in gradual progression of joint disease over a lifespan. “Patients remain at risk of bleeding and most clinicians would prefer to target higher trough levels above 3%, 5% or even higher to achieve less bleeding,” Dr. Carcao said. Extended half-life factor concentrates and non-factor therapies, for the most part, can be administered subcutaneously, can achieve much better protection than 1% factor trough levels, and can be tailored to allow lower treatment frequency and/or provide higher factor trough levels. “But no matter how you tailor or individualize prophylaxis, the ultimate goal of all prophylaxis therapy should be the same – to have no spontaneous bleeding,” he reiterated.

Major new non-factor therapies are in development such as anti-tissue factor pathway inhibitors (anti-TFPIs) and fitusiran. The first and only one currently licensed for use is emicizumab. The WFH guidelines recommend the use of emicizumab prophylaxis to prevent hemarthrosis, both spontaneous and breakthrough bleeding, in patients with severe hemophilia A without inhibitors; while noting that there are very little long-term clinical data on outcomes and calling for such data to be collected.

Prophylaxis in hemophilia is no longer strictly IV infusion of the missing clotting factor, Dr. Carcao said. “The fact that prophylaxis is not just factor anymore is forcing us to address an update to the definition of what is prophylaxis.” The conventional definition was set out in the 2014 communication of the Factor VIII and IX Subcommittee of the Scientific and Standardization Committee of the International Society on Thrombosis and Haemostasis (ISTH): “The regular intravenous infusion of the missing clotting factor VIII in people with hemophilia A and factor IX in people with hemophilia B given in order to increase the missing factor VIII or factor IX with the intention to prevent bleeding.”

The WFH guidelines propose a new definition of prophylaxis based on outcomes rather than dosage of therapeutic products: “The regular administration of a hemostatic agent/agents with the goal of preventing bleeding in people with hemophilia while allowing them to lead active lives and achieve quality of life comparable to non-hemophilic individuals.”

Inhibitors: Transformative new therapies
The disease burden for hemophilia patients with inhibitors is significant compared to patients without inhibitors, noted Dr. Margaret Ragni, hematologist and director of the Hemophilia Centre of Western Pennsylvania, lead author of the chapter on the management of inhibitors. “These patients have more serious bleeding and complications, more allergic reactions – primarily in those with hemophilia B – a higher rate of hospitalization, greater treatment costs, and a higher mortality rate,” she said. “The implications of these various burdens are that all patients should undergo a trial of immune tolerance induction (ITI) therapy.”

Dr. Ragni described WFH guidance on inhibitor screening, which should be performed routinely and in the following circumstances:

“This is an exciting time in the management of patient with inhibitors,” Dr. Ragni said. “We now have factor therapies in early phase trials, including extended half-life recombinant activated factor VII (rFVIIa) as treatment and prophylaxis in inhibitor patients, non-factor replacement therapies in early phase trials including the small interfering RNA (siRNA) therapeutic targeting anti-thrombin referred to as fitusiran, and anti-TFPI therapies for prophylaxis in hemophilia A and B with or without inhibitors.” The single approved non-factor replacement therapy at this time, emicizumab, is increasingly available and increasingly used in more countries around the world for prophylaxis in hemophilia A patients both with or without inhibitors.

Dr. Ragni also described WFH guidance on surgery and invasive procedures in patients with inhibitors; and new guidance on immune tolerance induction (ITI) therapy based on the most recent evidence. The WFH recommends that ITI should be started immediately after detection of inhibitor. For ITI for hemophilia A patients, the treatment of choice includes recombinant or plasma-derived FVIII; or recombinant FVIII Fc fusion protein (rFVIIIFc). In general, success is about 70% in hemophilia A patients, and significantly lower in hemophilia B patients. There are insufficient data on ITI in hemophilia B patients, therefore, the WFH does not make specific recommendations for these patients. It should be noted that FIX may increase allergic reactions or nephrotic syndrome. Immunosuppression can also be considered. If ITI is not achieved in 2-3 years, it is considered to have failed.

Following successful ITI, FVIII or FIX prophylaxis should be implemented, with very close monitoring. Data on the impact on extended half-life factor concentrates are limited. For product switching to another type or brand of FVIII or FIX, evidence indicates no significant inhibitor risk, therefore, there is no preference for the product used.

Specific hemorrhages: new evidence and guidelines
Dr. Johnny Mahlangu, Clinical Hematologist at Charlotte Maxeke Johannesburg Academic Hospital and Head School of Pathology at the University of the Witwatersrand and NHLS, highlighted recommendations on the treatment of specific hemorrhages. For pain management, the previous WFH guidelines recommended avoidance of the use of opioids in people with hemophilia; with the evidence now available, the guidance is that opioids can and should be used if indicated and provided the duration of opioid use is clearly defined.

Panelists also reviewed the evidence on a controversial topic in hemophilia, whether or not bleeding joints should be aspirated. The previous guidelines advised avoiding aspiration of joint (arthrocentesis). Following review of the evidence, the guidelines now advise that arthrocentesis can be undertaken to treat a tense painful hemarthrosis or suspicion of infection but should not be done on a routine basis. It is not performed in many practice settings to avoid the risk of intra-articular infection.

Guidelines on treatment of life- and organ-threatening bleeds (i.e., central nervous system, throat, neck, and gastrointestinal bleeding) were retained from the previous guidelines. New guidance advises the use of antifibrinolytics for gastrointestinal bleeding, which are associated with significant reduction in mortality and bleed rates, and emphasizes monitoring of hemoglobin levels for abnormal bleeding.

In addition, based on the evidence reviewed and current practices, the WFH now advises that nasal packing of nosebleeds should be avoided. “Where this practice is difficult to change, we recommend that the gauze should be soaked in antifibrinolytics so that they can also serve the purpose of stopping the bleed,” Dr. Mahlangu said.

The third edition of the WFH Guidelines for the Management of Hemophilia will be available on the Haemophilia journal website at the end of July.