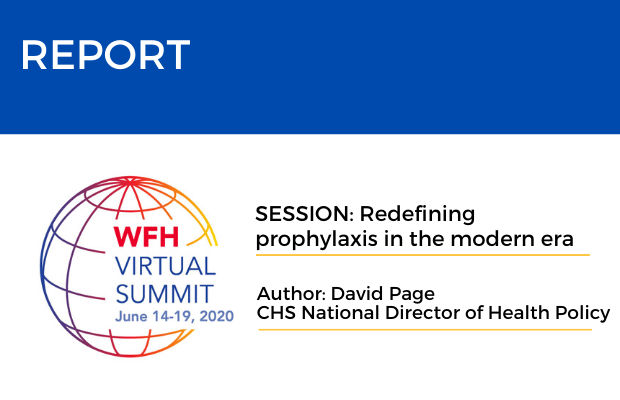 A series of renowned speakers at the World Federation of Hemophilia Virtual Summit re-defined prophylaxis in this era of innovative therapies, including non-factor replacement therapies.

He cited research (Collins, JTH, 2009, 2010) showing that adherence, or lack of adherence, to prophylaxis was the most important determinant in maintaining joint health. Other research (Oldenburg, Blood, 2015) demonstrated the development of joint disease over 30 years in the presence of prophylaxis with factor replacement, even when no clinical bleeds were reported.

The second speaker, Dr. Robert Klamroth, Director of the Haemophilia Treatment Centre at the Vivantes Hospital in Friedrichshain, Germany, cited the landmark den Uijl study (Haemophilia, 2011) that showed very little joint damage in people who maintained a FVIII level of 11% or higher, which is clearly not attainable with current FVIII replacement therapy in severe hemophilia A. His own research (ISTH, 2019) compared two cohorts, one with a trough level of 1-3% and the other with a trough level of 8-12%. Not surprisingly, the annual bleed rate was lower and the proportion of patients with no bleeds higher in the second group, albeit with more frequent infusions and double the utilization of FVIII.

The third speaker, Dr. Johnny Mahlangu, Professor of Hematology at the University of Witwatersrand in Johannesburg, South Africa, concluded that the target for optimal care for hemophilia should be steady state prophylaxis—that is, an absence of high peaks and low troughs—which can be obtained with approved substitution products like FVIII mimetics (e.g. emicizumab) and with experimental products to re-balance hemostasis and thrombosis such as RNA interference (e.g. fitusiran), anti-Tissue Factor Pathway Inhibitors and anti-protein-C.