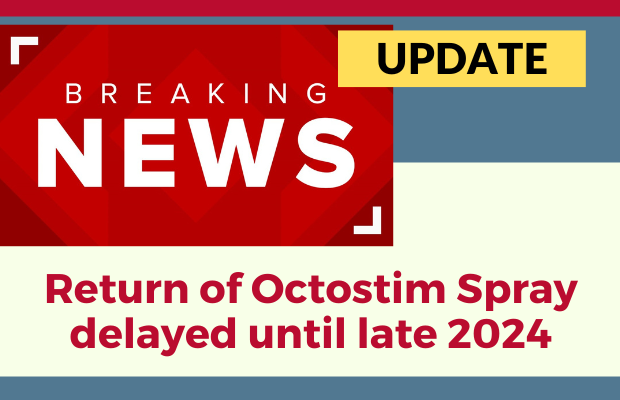 In a letter to the European Haemophilia Consortium dated May 31, 2022, Ferring Pharmaceuticals informed the bleeding disorder community that Octostim (desmopressin) Nasal Spray 1.5 mg will not re-start manufacturing until some time in 2023 and will not make deliveries to the market until the second half of 2024.

In July 2020, Ferring issued a voluntary recall of Octostim Nasal Spray after routine testing obtained out-of-specification assay results in some vials of desmopressin nasal spray. The assay identified the potential for higher concentrations of desmopressin in some bottles. To prevent a reoccurrence of this issue, Ferring is in the process of procuring, installing and qualifying a new production line.

Desmopressin (DDAVP, Octostim) remains on the market in formulations that can be infused intravenously or injected subcutaneously. Desmopressin is prescribed for some people with mild hemophilia A and von Willebrand disease to control and prevent bleeding.

Clinician and patient groups have been encouraging other suppliers to step forward with a desmopressin nasal spray formulation. The Canadian Hemophilia Society will inform the community if and when these efforts are successful. In the meantime, patients are encouraged to continue to consult their prescribing clinicians on the best alternatives.