Running a marathon in record time with severe hemophilia A 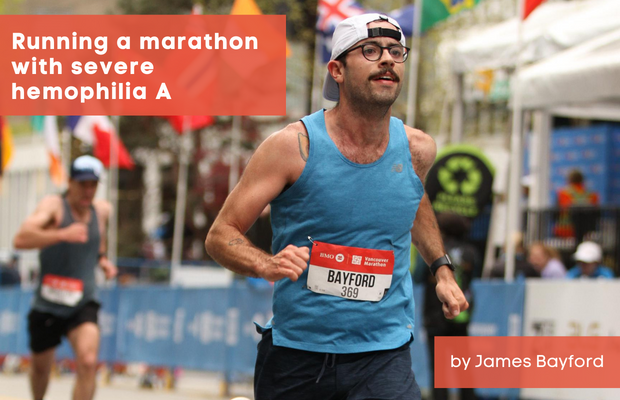 “Why?” Is a question I asked myself as I laced up my running shoes before a scheduled 20 mile (32 km) training run. “Why not?” was the answer I often came back to, or “because you can”. Eventually, I came to a different answer “do it for the ones who can’t”.

Running isn’t recommended for people with hemophila, it’s high-impact, and carries some risk, but it’s not forbidden either. I searched for other runners with my condition, as I wanted to know if it was even possible. I found almost no records of others attempting the feat of the marathon.The fastest time I found was an impressive 3:35 by fellow Canadian Paul McNeil, out of Sudbury, Ontario.

After much consideration, I decided that I want to share my story, with the hope that it can inspire other people living with hemophilia to pursue their own goals and dreams, whether athletic or otherwise.

Becoming a runner
I never thought I would be a marathoner, not because of my hemophilia, but because I simply hated running growing up. When I started running it was originally a way to lose weight, and to feel better in my body. I had ballooned to over 200 pounds by the midway point of the Covid lockdowns, and in January of 2020 I knew I needed to become healthier. I hadn’t always been overweight, and it has a sinister way of creeping up on you. Before you know it, you don’t recognize yourself in the mirror.

I took up cross-country skiing as a way to get outdoors in a time when we were told to stay inside, and as a way to get back into shape. It remains my favourite sport in the world (more on that later), but is dependant on one thing which is not always plentiful, snow. Sure enough, with the coming of spring I had to find another sport to keep up my weightloss journey. I looked in the closet at my old pair of Asics trainers, and figured, well maybe I’ll just go for a run. So, that’s how I became a runner.

It wasn’t easy at first, I struggled mightily to run at all. I figured by skiing all the time through the winter I would’ve been in top shape to go for a short jog, but it turns out it’s a different beast. My heart rate was through the roof, and my pace disappointly slow, but a fire was lit. Eventually, it got easier, and I was really encouraged as I wasn’t getting any bleeds so I kept running almost daily. It’s one of those sports where the love of it creeps up on you until unironically you start to call yourself a runner.

Daily infusions
Early on in my running career I knew I would have to approach this with caution. When I started, I wasn’t doing anything too crazy, a few kilometres at a time, but as I began to build up my mileage as my fitness increased I started to think about how my factor levels and specifically my trough levels would affect my chances at bleeding into the joints. After talking with my team in Vancouver, who are amazing, we came up with a plan to infuse daily, ensuring that my factor VIII levels would remain steady.

Doing an intravenous injection every day sounds like it would be hard, or annoying, but it becomes as routine as brushing your teeth. I was incredibly motivated to get faster, and I was seeing steady gains to my fitness, so I never missed a daily infusion. By this point I had lost over 50 pounds, and my 5k time had fallen from 30 minutes to around 22 minutes. I started to wonder what else was possible, and how far I could take this running thing.

Doing it not because it’s easy, but because it’s hard
The marathon is the definitive endurance event. It rewards grit, determination, and the willingness to push through the pain. You don’t have to be fast to run a good marathon, you just have to be well prepared, disciplined, and committed to the process of training. Living with a chronic condition such as hemophilia has taught me many lessons, among them: sticking to a treatment plan, accepting circumstances beyond your control, and the ability to endure pain that many others without our condition would wince at.

I knew that it wouldn’t be as easy for me to run a marathon as it would be for a healthy person, but this is precisely why I wanted to try it. I wanted to show the community and the world that we are capable of much more than we think we are.

I knew it wouldn’t be easy, but that was kind of the point.

The importance of training, recovery, sleep, nutrition
A marathon is hard even without a bleeding disorder – over 80% of runners sustain an injury in the course of each year – so I knew I would have to be even more diligent on the factors I could control. This meant sticking to a regimented training plan to ensure I was fit enough for the race, eating properly to ensure my body could repair itself after a tough workout, and sleeping and recovering as well as I could.

I knew I would need to be better than average to put forward a good performance. I trained for 16 weeks, with a maximum of 90km run per week, as well as cross training with nordic skiing. I ensured I got 8 – 9 hours of sleep per night, and I ate substantially more protein than I normally did. I made sure to always honour my scheduled rest days and tried to keep my stress outside of training to a minimum. During marathon training I also fully abstained from alcohol due to its recovery hindering effect.

Finishing in record time
The race went off without a hitch, for the most part. I had dialed in my fueling strategy during the long months of training, and I felt fit, well rested and most importantly, injury free. I’m proud to say through a combination of preparation and luck that I suffered zero joint bleeds during the 16 weeks of training.

As I toed the start line, I thought about how lucky I was to be there. I thought about how in another country, I may not have been this fortunate, and if I had been born 20 years earlier I would not have been able to reach this point. Throughout the race I encountered many feelings, ranging from excitement, exhaustion, but the feeling I kept coming back to was intense gratitude for everything that allowed me to achieve this goal. I was surrounded by more than 4,500 other runners, and I didn’t feel that I was different from any of them.

For a fleeting moment, I forgot about my disease in a sort of transendence from normal life. For anyone curious about running a marathon, it’s an experience that cannot be describe fully by words. The sound of thousands of runners all striving for the same goal, and the mini earthquake of everyone’s footsteps. It’s a surreal and beautiful experience, and I highly recommend it to everyone who can physically undertake it. 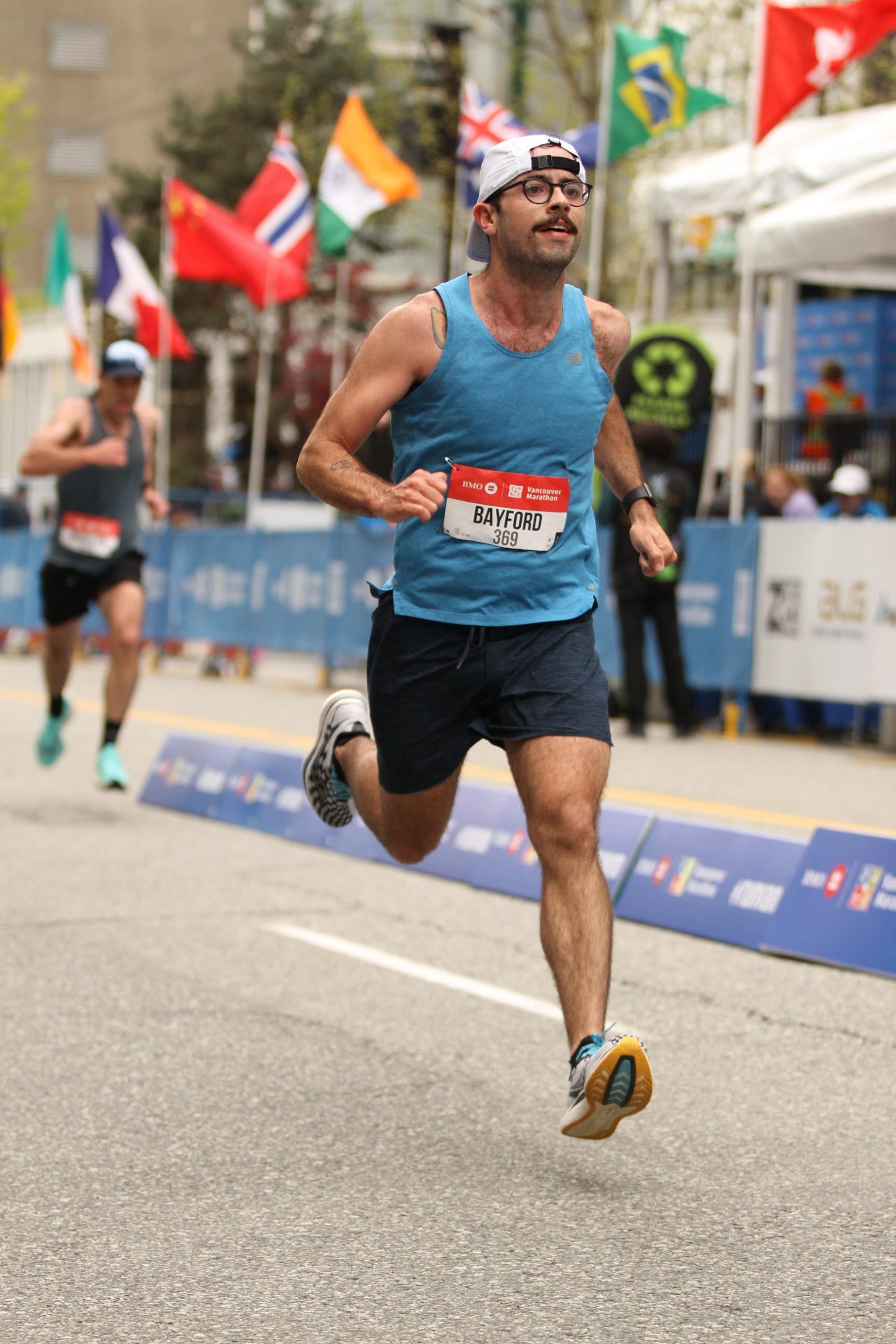 Digging deep in the final stretches of the marathon. Feeling the pain of kilometer 42, with the finish line in sight.

The point of this article is not to convince all people with hemophilia to run a marathon, and I know there are some people for whom it would be impractical. I set out to prove that people with severe hemophilia can achieve ambitious goals. This doesn’t have to mean running, or even sports, but it means finding a mindset from which you believe in yourself, and your ability to do something hard. With dedication to your goal, you can do almost anything. Using the lessons you’ve learned through managing chronic disease, you are stronger than you think and greatness lives within all of us.

I crossed the finish line in 3 hours, 10 minutes, 45 seconds. This was good enough for the top 5% of the field overall. It beat my goal of 3:20 by almost 10 minutes, and eclipsed what I thought was possible. I didn’t walk, except for through the last water station when my stomach started feeling queasy. As far as I know, this is the fastest time by any person with severe hemophilia in Canada, and possibly the world. The data is not easy to come by when it comes to runners with hemophilia. 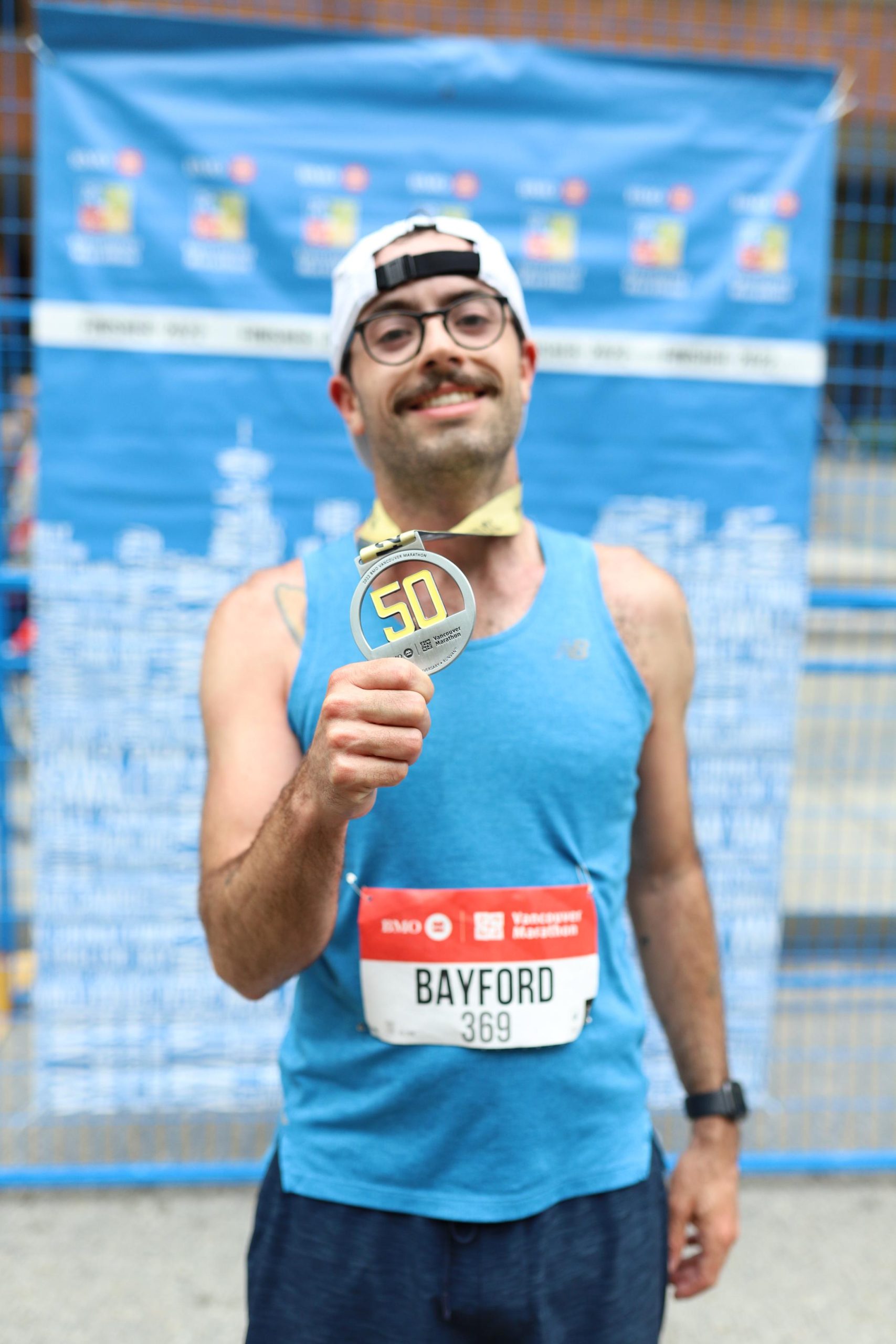 That amazing finish line feeling. It was a moment of bliss, as the culmination of 4 months of training finally came to fruition.

I would like to reiterate that globally, there is a great inequity with hemophilia treatment, some people cannot receive factor 8 at all, whereas others are chronically undertreated. Furthermore, some people are never diagnosed at all, and live tragically short lives. I know this achievement is not mine alone, and could never have been possible without the generosity and kindness of the medical system in Canada. I am so thankful for the care that I receive.

What’s next: emicizumab, and future plans
Well, this year I’ve refocused on my primary winter sport, cross-country skiing. I find it to be an excellent aerobic challenge, and much more gentle on the body. I am racing back-to-back 40 km ski marathons in April, both classic and skate techniques. I hope to finish in a similar position to the BMO marathon (top 5% of the field). The training is going well to date, with over 750 kms skied since the season started in October here in Kelowna, at the time of writing. I put in the odd day in the gym lifting weights to improve my strength, and hope to place a greater emphasis on this over time as the training plan progresses. I have signed up for a couple of tune-up races throughout the winter to guage my progress, and to see how everything is coming along. 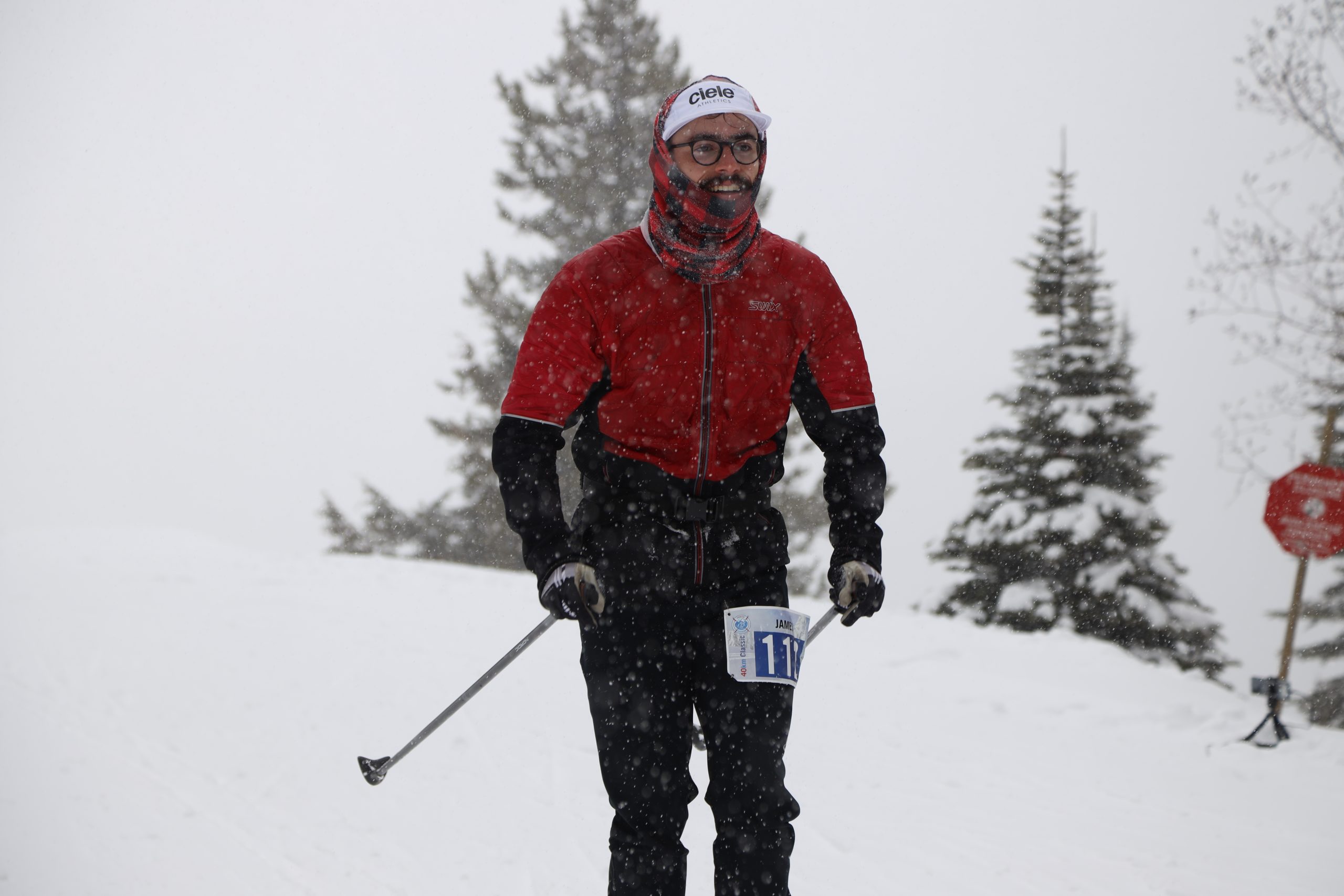 Taking part in the Sovereign2Silverstar Ski Marathon in beautiful Sovereign Lake, BC. One of the best places to nordic ski in the world. I’m looking forward to taking part in the 40km classic, and 40km skate race on April 1 and 2 of this year.

I switched from factor 8 treatment to emicizumab in the mid-summer, and have been having great results thus far. I haven’t had any bleeds requiring additional factor 8, and I have been feeling very strong on the new medicine. The fantastic thing about emicizumab is the dosing schedule of once-weekly subcutaneous injection. I have found it very easy to forget I even have hemophilia at all. The future is looking very bright for the management of our disease in the countries in which we are lucky enough to receive these therapies.

Things are changing fast in the medical landscape, and people with chronic disease can now live more and more normal lives. To close out, I would like to invite anyone who wants to talk to reach out to me. If you want to talk about your goals, your achievements, and ask anything about running, skiing, or life I would be happy to talk to you. I hope this testimonial can show you that you too can do difficult things, if only you think it’s possible. I wish you all health and happiness.