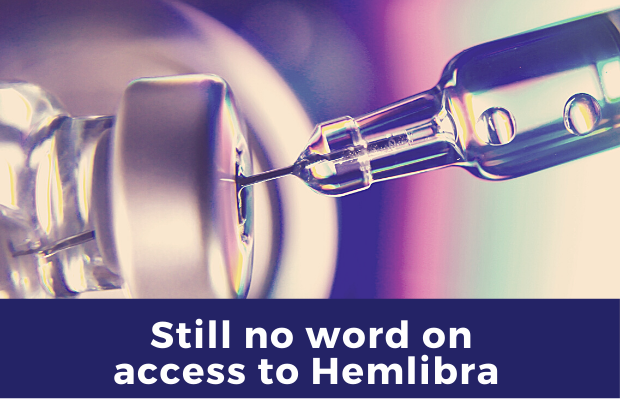 August 8, 2021, Montreal – There is still no word on access to Hemlibra from ministries of health in Quebec and the rest of Canada a full two years after Health Canada approved the product for those without an inhibitor.

Hemlibra (emicizumab) is a bispecific monoclonal antibody that mimics the function of factor VIII to prevent bleeding in hemophilia A. It is injected subcutaneously once a week or less and is approved for all ages.

Both Canadian Blood Services and the Canadian Agency for Drugs and Technologies in Health have made positive recommendations to the Council of Deputy Ministers. The provinces and territories have promised a decision “this summer.”

In Quebec, the Institut d’excellence en santé et en services sociaux issued a negative recommendation in December 2020. Its methodology and conclusions have been sharply criticized by hemophilia experts. Conversely, the Comité consultatif national en médecine transfusionnelle, an expert committee of Quebec hematologists, recommended access. Both reports are on the desk of the Minister of Health but no date for a decision has been announced.

“Our members are becoming increasingly frustrated with the long delay,” said CHS President, Wendy Quinn, “especially those families whose children are having a difficult time with port-a-caths and frequent infusions.”

Canada remains one of the last developed countries in the world to refuse access to this innovative product. In many countries it is considered “standard of care.”

As Hemlibra is currently being used in Canada for patients with inhibitors and is in good supply, there should be no delay in access to people without inhibitors once decisions are made.

The Canadian Hemophilia Society and its chapters continue to advocate for immediate access.