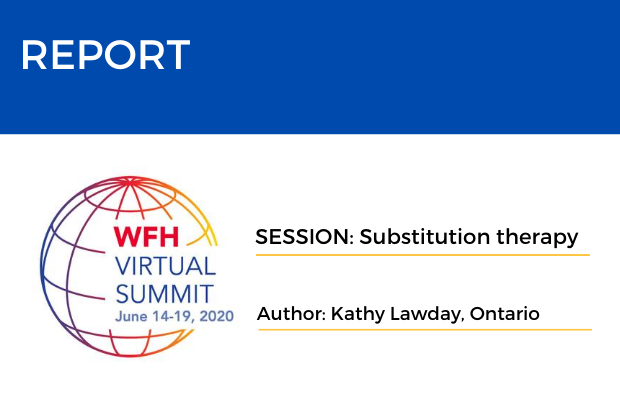 Hemlibra (emicizumab) is indicated in Canada for hemophilia A patients with or without factor VIII inhibitors as routine prophylaxis to prevent bleeding or reduce the frequency of bleeding episodes but currently is only reimbursed through Héma-Quebec and CBS for patients with inhibitors. Currently experience with emicizumab is limited in patients with mild or moderate hemophilia. This session discussed prophylaxis, pediatric experience and potential use in immune tolerance induction of emicizumab as well as another non-factor agent, fitusiran.

In the first presentation, the advantages of using emicizumab were described. Prophylaxis needs to only be administered every 1-4 weeks depending on the dose and on the individual patient response. It can be used in non-inhibitor patients – with negligible inhibitor development to date, and in patients in whom ITI has been both successfully achieved or has failed. Self-administration by subcutaneous route was facilitated and central venous access devices could be removed. Benefits extend beyond reduction in annual bleed rate to include joint health, physical activity, non-bleed symptoms, reduction of intracranial hemorrhage and use in previously untreated patients. Bone health concerns, with increased fracture risk, have been expressed in the absence of FVIII but the increase in physical activity may counterbalance this risk. Clinical trials continue to increase understanding of the role of emicizumab in pediatric non-inhibitor patients and to observe long-term safety including bone health. Some patients with mild/moderate hemophilia may have a clinically severe phenotype, with arthropathy, and may be at higher risk of developing an inhibitor. Emicizumab, however, was demonstrated to enhance hemostatic potential in such patients and could be beneficial. Further studies are looking at additional laboratory monitoring techniques to assess global coagulation properties which will inform decisions on the use of aPCC or rFVIIa bypassing agents for the treatment of breakthrough bleeds and in the perioperative setting as well as detection of FVIII inhibitors in a patient on emicizumab. Currently bypassing agents should be discontinued during emicizumab therapy.

The potential for early controlled low dose exposure to FVIII while on emicizumab prophylaxis to lower cumulative inhibitor incidence is interesting. Emicizumab is added to an ITI strategy in the “Atlanta protocol.” Emicizumab weekly prophylaxis is given in combination with 50-100 IU/Kg FVIII three times a week. This protocol is less burdensome, quicker to reduce inhibitor and provides bleed protection due to emicizumab prophylaxis. Studies are starting, including Canadian participation, in which ITI with Nuwiq/Octanate/Wilate +/- aPCC or rFVIIa will be compared to the same regime with addition of emicizumab (Atlanta Protocol) and to routine prophylaxis with emicizumab, aPCC or rFVIIa without ITI (MOTIVATE Study). The PRIORITY study will look at post ITI FVIII exposure in hemophilia A patients on emicizumab with successful tolerance.

Prophylaxis is not usually started in very young children because of the difficulties of venous access for factor administration and the optimal time to start emicizumab prophylaxis is yet to be defined. Ongoing HAVEN studies are looking at children as young as three months old and in surgical settings and there is increasing real-life evidence of efficacy and safety in infants and toddlers, which is captured in registry studies including CBDR and PedNet.

Fitusiran is being investigated for the treatment of both hemophilia A and B with or without inhibitors. Correction of the hemostatic imbalance due to insufficient thrombin generation through lack of FVIII/FIX by lowering antithrombin has shown a reduction in annual bleed rate during prophylaxis. Treatment is a fixed dose administered subcutaneously once a month. Bleed management guidelines have been established for proper management of breakthrough bleeds and surgeries and several surgeries have been successfully completed with factor or bypassing agent coverage. The safety and efficacy of fitusiran continues to be evaluated in ongoing Phase 3 studies.