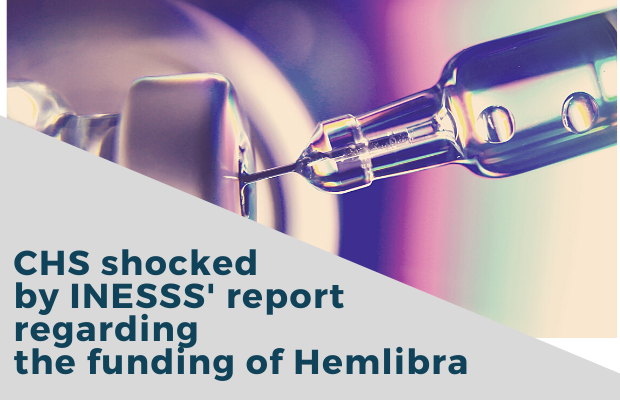 The Institut national d’excellence en santé et en services sociaux (INESSS) released its recommendation on funding Hemlibra (emicizumab) for the treatment of severe hemophilia A (without inhibitors) on March 16. It recommended to the ministère de la Santé et des Services sociaux (MSSS) that Hemlibra “not be included in the list of products for Quebec’s blood system.”

“We are shocked and dismayed,” said Paul Wilton, president of the Canadian Hemophilia Society (CHS), headquartered in Montreal. “We have talked to hundreds of people around the world whose lives have been transformed by this new therapy. Reading this report, one has to question the competence and objectivity of INESSS. Their conclusions contradict the scientific evidence presented in their own report. The perspective of patients is entirely misrepresented. The efficacy of current treatments is exaggerated.”

We cannot understand how such a report could be produced. Does INESSS not master the research methodologies used to evaluate a drug for a rare disease such as hemophilia where the number of patients enrolled in research studies is small? Were international experts and health technology assessments not consulted? Did fears about potentially higher costs (prices are not known at this stage) lead INESSS to reject Hemlibra on unfounded issues of efficacy and safety?

Endorsement of this recommendation by the MSSS would leave Quebec standing as an anomaly, alone among developed countries in not making this treatment advance accessible. For example:

The Association of Hemophilia Clinic Directors of Canada (AHCDC), representing the 70 expert physicians who treat hemophilia across Canada, including 11 in Quebec, has stated, “We are well aware of the benefits Hemlibra has brought to patients in other advanced countries, where it has become the treatment of choice for many severely affected hemophilia A patients. Failure to list Hemlibra would be unacceptable to members of the AHCDC.”

Research data and real-world evidence have proven that Hemlibra …

In 2019, Hemlibra was introduced across Canada, including Quebec, for the treatment of a sub-group of 80 patients with hemophilia A with inhibitors, a complication of hemophilia in which the body’s own immune system destroys the factor VIII protein when infused. Hemlibra proved to be life-changing, reducing bleeding and hospitalizations, and greatly improving quality of life. Moreover, the change resulted in tens of millions of dollars per year in savings in drug costs for the health system.

“The CHS and its Quebec Chapter are appealing to Minister Dubé,” said Paul Wilton. “We are asking him to recognize that the conclusions of the INESSS report are contrary to evidence and best practices from around the world. The report is flawed and should be set aside. We are requesting that the MSSS immediately add Hemlibra to the list of products for Quebec’s blood system. Quebeckers with severe hemophilia A deserve no less. Quebec used to be among the world leaders in hemophilia care; now patients receive a lower standard of care than those in some developing countries.”

Go to www.hemophilia.ca/hemlibra-access to know everything there is to know about the issue and to see how you can add your voice to ours to make a real difference.