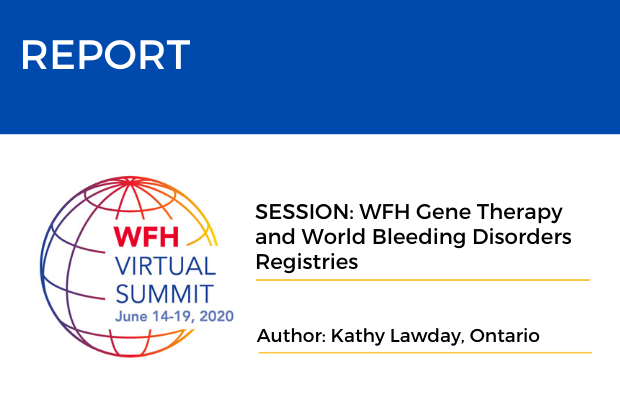 WFH Gene Therapy Registry, presented by Dr. Barbara Konkle
For many years gene therapy has been in the future – but now, for an increasing number of people with hemophilia, it is here. It is important that data from people who are treated with gene therapy is collected to inform future decision making. A multidisciplinary Steering Committee has been set up by the World Federation of Hemophilia (WFH) to develop an international gene therapy registry that meets the needs of researchers, manufacturers, regulatory authorities and patients. Dr. Barbara Konkle, Associate Chief Scientific Officer at Bloodworks Northwest, and Dr. Alfonso Iorio, Professor in the Department of Health Research Methods, Evidence, and Impact at McMaster University, are co-chairs. The development of the common data set will be an iterative process as new observations are made. The WFH Gene Therapy Registry (GTR) data set was finalized in April 2020 and submitted for publication and will be managed by a sub-committee of the International Society on Thrombosis and Haemostasis (ISTH). The database should be implemented by Q1/2021. The goals of the WFH GTR are to help:

Data on safety and adverse events will be collected: FVIII/FIX inhibitors, thrombotic events, autoimmune disorders, malignancies, liver function, and mortality. Efficacy data to be collected include frequency of bleeding events (traumatic and non-traumatic) and requiring therapy will inform efficacy as will factor levels at baseline and post-infusion. The Patient Reported Outcomes, Burdens, and Experiences (PROBE) data will be used to follow functional outcomes. Data will be collected from patients entered into clinical trials, including those in early studies whose treatment was not effective as their outcomes are still important to the drug safety and efficacy profiles. Data will be collected at gene therapy initiation, follow-up visits and frequently throughout the first year, and then annually.

In terms of global implementation, the GTR will be the responsibility of bleeding disorder treatment centres (HTCs) providing gene therapy and/or HTCs following patients who received gene therapy elsewhere. Data transfer from existing national gene therapy registries will be enabled; for example, the American Thrombosis and Hemostasis Network (ATHN) will submit data to WFH GTR on an annual basis. The WFH is initiating outreach, readiness and educational programs to support participating HTCs. It will be very important to stay connected to the individuals treated by gene therapy who, once “cured,” may not stay connected to the hemophilia community as WFH plans GTR readiness programs. Advantages for HTCs participating in the WFH GTR include per patient funding for data entry, data visualization (i.e., summary or dashboard returned to HTC to assist in patient management), and the contribution of critical data on benefits and risks of gene therapy.

World Bleeding Disorders Registry: An Update, presented by Dr. Alfonso Iorio
National bleeding disorder registries such as the Canadian Bleeding Disorders Registry (CBDR) are very important but the WBDR is the only global registry, said Dr. Alfonso Iorio. The WBDR was established two years ago and meets standards of data confidentiality and ownership worldwide. There is a minimum dataset with additional data fields. As of May 2020, the WBDR has enrolled 80 HTCs and 5,487 patients from 38 countries. Asked why Canada was not part of the WBDR, Dr. Iorio indicated that discussions were ongoing with the WFH to ensure adherence to Canadian data privacy requirements, but participation by sharing data, perhaps not at a patient level but aggregated should be possible, similar to Czech participation. The WBDR collects data from medium income countries where the need for robust data is most needed. A patient mobile app is in development (MyWBDR) which will be linked to PROBE, akin to MyCBDR I suspect! The WBDR can be used in research already, WBDR data shows the median age of diagnosis in Africa is four years of age compared to western countries where diagnosis typically occurs by age one.

WBDR in clinical practice: Experience from the Belgian-Ivoirian twinning
Dr. Catherine Lambert of the Adult Hematology, Hemostasis and Thrombosis Unit at the Cliniques universitaires Saint-Luc in Brussels, Belgium, described the 2014-2018 HTC twinning with Abidjan, Côte d’Ivoire. While Belgium has a population of 11 million, 1,000 people with hemophilia and 6 HTCs, Côte d’Ivoire has a population of 23 million, 1 HTC and no national registry; clotting factor concentrates are provided through the WFH Humanitarian Aid Program and there is no prophylaxis therapy. During the twinning, 54 of 57 previously identified families were reached. Both centres signed up to participate in the WBDR, with the Brussels team providing assistance to the Abidjan HTC in navigating ethics approval and IT issues. Training was provided on data collection, logbooks and medical file structures to meet the data requirements of the WBDR. The use of the WBDR for data collection by both centres allowed comparison of many parameters. Data on 105 of 117 patients was entered into WBDR during a twinning visit to Abidjan, compared to 59 of 248 patients in Brussels, which highlighted an area for improvement in Belgium. Twenty-one per cent of patients in Abidjan were on prophylaxis (previously only on-demand therapy was available), compared to 78 per cent in Brussels. Benefits to both twinning partners were identified: objective data becomes available which can be used to enable ongoing assessment of the evolution of care in Côte d’Ivoire, the identification of local needs and improved outcomes, i.e., increasing the use of prophylaxis, and ultimately advocacy for care. Belgium recognized the need to better engage younger patients in data collection.

A number of questions followed these presentations: