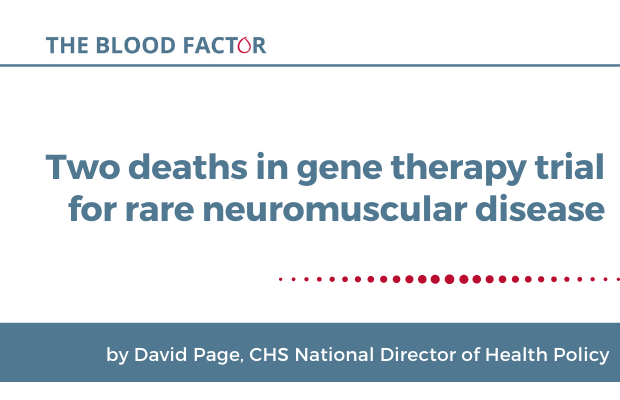 The CHS recently learned of two deaths of children under five years old in a clinical trial using AAV8-based vectors in another rare disease area, myotubular myopathy, or XLMTM.

We are bringing this to your attention as AAV8 (adeno-associated vector, type 8) is one of the vectors currently used in some of the clinical trials to investigate gene therapy for hemophilia.

XLMTM is a very rare disorder with an estimated mortality of 25% in the first year of life and 10% per year after age one. It is characterized by progressive muscle weakness and decreased muscle tone that impair the development of motor skills and may disrupt primary functions such as breathing.

The gene therapy trail, called ASPIRO, conducted by Audentes, a subsidiary of Astellas, is in the phase 1/2 stage to attempt to find a safe and efficacious dose, and has been put on hold. The children who died from liver damage had received the highest dose in the trial, which was five times higher than any used in hemophilia A and B trials.